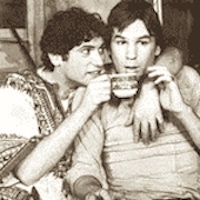 I did lots and lots of Off-Broadway stuff. No films or any Broadway plays or television. It was all live theater. Everything about theater is really wonderful. I always loved being an actor, the whole process, from auditioning to getting cast to rehearsals to production. It’s difficult work and stressful sometimes. It wasn’t really the kind of thing I'm cut out for because it’s very insecure. You have to spend a lot of time trying to sell yourself to agents and casting directors and people like that. I never was really good at that part of the business and never liked it very much. Before you get an agent you have to do all the negotiating yourself, try to sell yourself to people. And that’s what I wasn’t very good. But as far as the craft was concerned, I loved it. I loved everything about it. You know, I’m not sure I would have been really good, even if I had made a career of it. You have to wonder sometimes what you missed out on. I ended up gradually sort of giving it up. I just got tired. Didn’t want to do it anymore.

Way before that, though, at the end of 1975, right when Lincoln Center asked me to run CenterCharge, I had my one commercial acting success, with the Orion Repertory Company. The playwright Robert Patrick had a big hit with a play called “Kennedy’s Children,” which won Shirley Knight a Tony Award for Best Actress in 1976. His first play was called “The Haunted Host,” a two-character comedy. I won one of the parts, and the other character was Harvey Fierstein. This was Harvey’s first stage performance where he wasn’t dressed as a drag queen.

So, Lincoln Center gave me a leave of absence, and I went to Massachusetts to do the play. We first performed it at the Provincetown Playhouse. It’s about a young Midwestern kid who comes to New York City to become a writer. He’s straight and very narrow-minded and hooks up with this flamboyant gay writer with a friend who committed suicide, and that writer looks just like my character.

“The Haunted Host” was a big hit in Provincetown. The producer was a young kid with money, and he decided to do the play in Boston. Harvey and I both got into Actor’s Equity from being cast in this play.

We started off at Harvard’s Hasty Pudding Club, and it did well, so they moved it to a major theater in Boston, where it ran about three months, eight performances a week. For the main part, I enjoyed the actor’s life. It was three months of bliss, really. I probably didn’t get up till afternoon. I’d go and do the show fours hours a night: arrive at seven, leave at 11, and the rest of the time was free. This was November, December, January. It was cold, cold, cold the whole time we were there. I wasn’t motivated to go out, didn’t know anybody in Boston, didn’t have friends there. I just wasn’t in with the gay community. I spent a lot of time just reading, all night long.

Once you’ve done the play for a while, you get it down. The words never change. I can remember sometimes just for the fun of it, you know, Harvey would do some different things on stage, and you’d just have to deal with it.

There’s a point in the play where I have to take my shirt off, and Harvey takes my shirt and puts it someplace, and later he gives it back to me. But one night he decided to throw it out the window. There’s a fake window on the set, and he threw my shirt out this window, and it pissed me off, so I went to get it. I just walked out, left him onstage by himself and went to get my shirt and came back with it. He was not very pleased about that. But I was pissed off that he’d changed it by throwing my shirt out the window. For the most part, though, Harvey and I got along very well.

One big thing that happened, though, was that during the run, Harvey’s father died, and Harvey had to go home for the funeral. He missed maybe three performances, and he didn’t have an understudy, but I did. So I ended up playing his part, which was really fun for me. I’d been doing the show for so long, hearing the words so often, that I knew his part and my part both. So we did it that way for three performances. And I absolutely loved it. I got to go from playing this really straight Midwestern kid to playing this gay, flamboyant character. And I think I did a really good job of it. The stage manager said that in some ways he liked it better than Harvey’s performance. Of course, Harvey might be a little pissed to learn this.

When I returned to New York in 1976, I started running CenterCharge at Lincoln Center, and there I stayed until 2009. I am now retired.